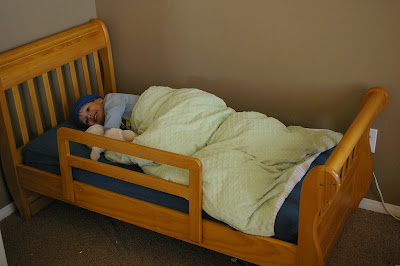 My baby boy became a big boy overnight. He has been sooo anxious for dad to put his "big boy bed" together. He has long been able to climb out of the crib and with baby girl Johnson coming soon, it was time to put him in a bed. Gratefully since he has been so excited to sleep in this bed, he has actually slept in it. The next transition is putting him in with the boys. Mike thinks it will be fine, all 3 boys in one room, and I'm going to go along with it. We have an extra bedroom downstairs, which now houses all my sewing and craft things as well as our computer, but Mike and I, as well as Owen, are not excited about the idea of him being downstairs by himself. 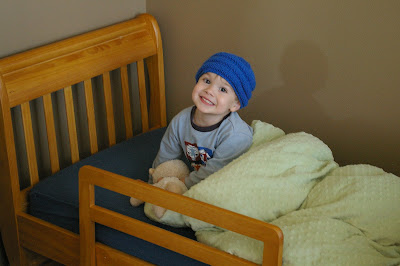 I love this photo of Tate. It says so much about his little personality.
He is a hilarious little boy. He holds conversations with us and his toys that just crack you up. You forget that he's only 2.
Created by Briana @ Sweet Dreams are Made of These at 2/16/2010