December 2010: Pickles Gets a Haircut 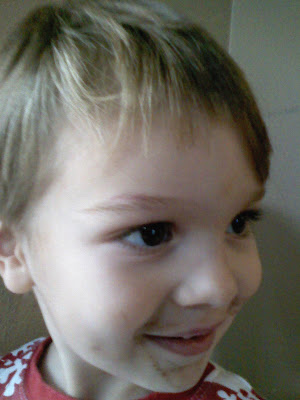 So its the first official morning of the kids' 3-week (yes, you heard that right, 3 weeks!) Christmas vacation and I was grateful for the lack of the mad morning rush.  Apparently my brain went on a vacation as well.  After I gave up on exercising since 10 minutes of my workout became 40 due to interruptions, I made myself a bowl of granola for breakfast.   I proceeded to put the almond milk in the cupboard not even realizing I had already put the granola in the fridge.  Wwow!  This was a continuation of my brain's vacation last night when I played a game with my family and managed to add up die to get from 28 to 22.  Great addition skills. Mike loved that one.

So, back to this morning... After making a phone call to the appliance repair man since my heavily used and abused dryer sparked and blew the breaker on Saturday, I looked over to see a very giddy Tate smiling up at me.  My eyes were drawn to his smile framed by his chocolate breakfast-shake mustache and beard. He stayed looking at me for awhile but then scampered away returning to what the boys were supposed to be doing, cleaning out their school supply/junk drawer.  What a great and responsible motherly thing to ask of my children I had thought!  Well not 2 minutes after I had received Mike's text response to my grocery location mix-up who thought that was funny and to "Enjoy these days with the kids at home!"  I heard some snipping and my kids response to my inquiries to what they were doing as "cutting hair".  Once again my brain was on vacation because it took me 2 long seconds before that computed and I exploded out of my chair.

Owen, out of all three of them, yes the 8 year old, was the one that had cut his littlest brother, Tate, the giddy one's, hair.  Surprisingly this is our first encounter with sibling haircuts.  Tate has thrilled with his haircut.  Me... not so much.  Not my greatest mothering moment.  After there were some distribution of boys into corners, I quickly sent Mike a text of how I was enjoying the kids until Owen cut Tate's hair.  He responded with something that made me laugh.  Oh how I needed that.  Mike has a way of making me laugh, wording things just right, and putting things into perspective, mainly because he has a grand perspective of life, and maybe a small part of it comes from the fact that he's there at work and I'm here in the trenches:-)  "Find the fun.  Find the humor.  Things that can't be changed!!! (Don't you mean Pickles got his haircut!)"

I tend to be too serious minded as a mom and I'm working on it.  Owen told me in the car last week when I responded seriously to something he meant not to be taken seriously, "that most people joke around Mom".   I told him that he was right.  Oh how I wish I could be more silly and laugh more at the "inconveniences" that come my way at a constant pace.  I pray, literally, for a better sense of humor with my children.

"Pickles" is the nickname that Tate has given himself.  Hilarious, that kid!  He also calls Felicity "Bobo" for some reason.  Mike has started coming up with various little stories of the Adventures of Pickles and Bobo and this was just one more adventure for the lot.

Mike asked me to send him a photo of Tate's new do from my phone and I couldn't help but laugh.  Thankfully!  laugh at the gomer haircut and then at the still giddy and proud smile plastered on Tate's face. 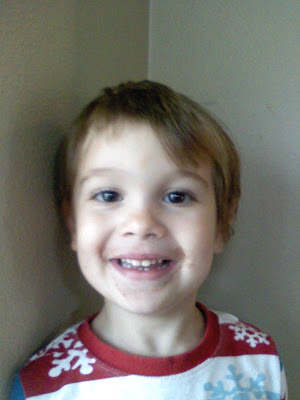 I decided that I had seen this haircut before.  At first I thought it was from the creepy guy on Charlie's Angels, you know, George McFly, but no that's not exactly right.

Then it came to me, its from the bad guy on The Fifth Element (who is also the same guy that plays Sirius Black, never would have guessed).  A nearly perfect resemblance!

Email ThisBlogThis!Share to TwitterShare to FacebookShare to Pinterest
Labels: pure boy bedlam, seriously? this happened?, Tate, the dish on mommyhood