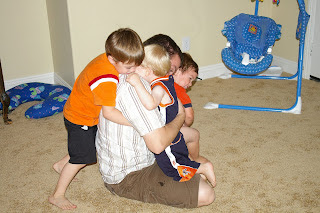 The boys favorite game to play is "Knock It Daddy Over" as Eyan named it. Basically it goes like this: start from across the room, run at Mike as fast as you can and jump on him in attempts to knock Daddy over. The funniest thing is watching Eyan run at Mike - he leads with his elbow. That kid is so solid. Mike literally goes "hoowah"(you know, the sound you make when you get the wind knocked out of you) when Eyan lands on him. Owen tries really hard, sometimes even starting to run outside the room. Here Mike is with Owen, Eyan, and their cousin Davis.
Created by Briana @ Sweet Dreams are Made of These at 8/31/2007