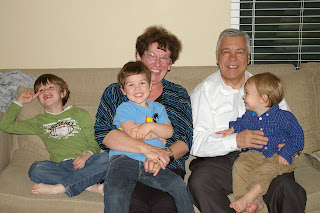 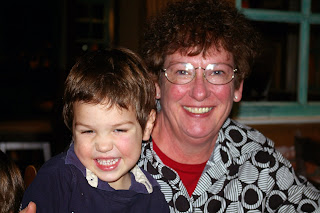 We are lucky to live close to such desirable places that family come here often. This time it was Mike's parents. They came out to the house and were really able to see the boys in action. They were hyper to say the least! Later that week we were able to spend some time at Disneyland with them. Eyan became Grammy's little shadow and talked her ear off. It was really cute. Then of course over to Mimi's Cafe for dinner, their favorite place to eat. The boys always know if Grammy and Grandpa are in town, its a meal at Mimi's Cafe:-)
Created by Briana @ Sweet Dreams are Made of These at 6/10/2009