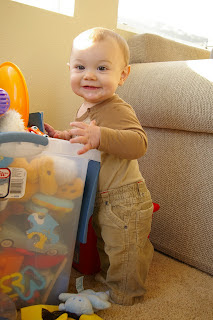 Slow down Tate!!! I can't believe him. He just wants to be as grown up as his brothers. He is pulling himself up on everything. He has even tried to turn away from the sofa and walk. I'm not sure what I will do if he starts to walk this early. He's still so little, it will seem so unreal to see a little guy like him walking around. Sometimes when we try to sit him down, he won't bend his legs, but tries to walk. Its hysterical. Owen was 13 months and Eyan was 17 months when they began to walk. Tate isn't even 9 months yet!! We're in trouble.
Created by Briana @ Sweet Dreams are Made of These at 12/25/2007