Well I am so excited to say that my first attempt at doing something with my peaches and plums was a success. To quote my sister, "This is the best thing you have ever made." Well Vanessa, thanks so much, but that's pretty easy to accomplish when I really haven't made anything:-) People, I think I've maybe made cookies once, never a cake, cupcakes a disaster. So you know this must be easy.

Since I hate when things go to waste, a box of plums sitting on my counter was definitely motivation to make something with them (which is strange since food in my cupboard or in my fridge hasn't motivated me to cook anything before). 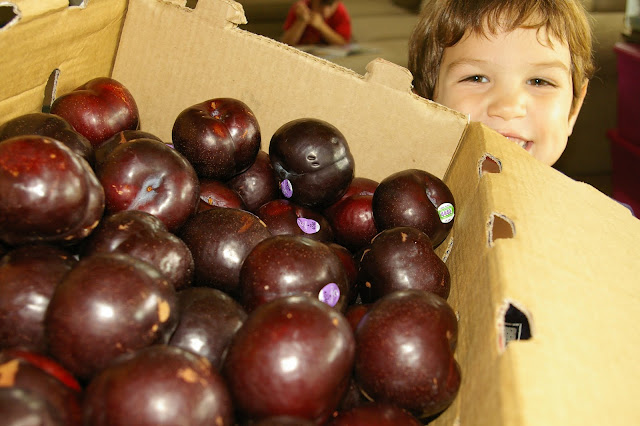 Cute little E peering around our huge box of plums 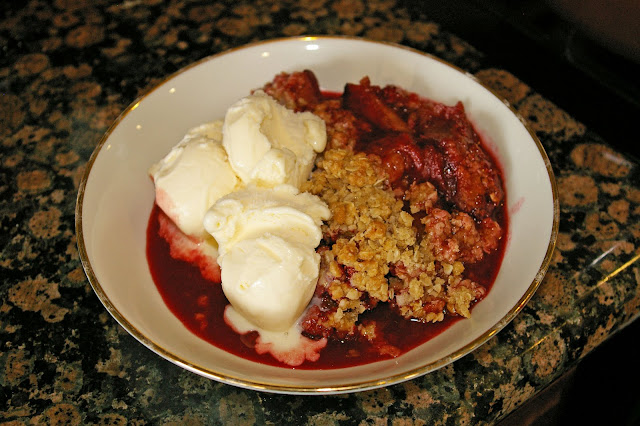 1. Mix the flour and oats in a bowl with half of the brown sugar. Add the butter, and rub it in with your fingers [note: was not going to use my fingers since my nails are long and that would have been a nightmare - some sort of utensil worked just fine] until the mixture becomes clumpy. Set it aside.
2. Cut up the plums. Eight longitudinal slices per plum is good. Mix them in a bowl with the lemon juice, cinnamon, and the other half of the brown sugar. 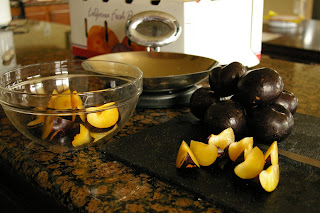 Each plum cut into 8, then measured out 4 lbs. (I doubled the reciple) on Mike's nifty scale

3. Put the fruit mixture in a greased baking dish. Crumble the topping over it. Bake at 375 degrees until the fruit is bubbling and the topping is crisp and brown and the whole house smells irresistible, about 55 minutes.

Since I had sooo many plums, I decided to double the recipe. I ended up using 14 plums which sounds like a lot until you look at my box and see that I haven't really made a dent. 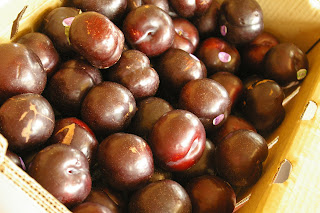 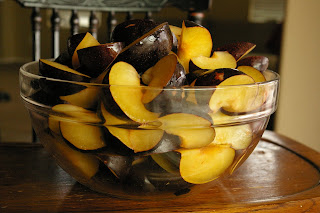 4 lbs of cut up plums waiting to be drowned in lemon juice, brown sugar, and cinnamon

Well 1 minor hiccup in the plan, Mike needed to use the oven at the same time as I did and since he has this strange philosophy that feeding our children dinner should take precedence over feeding them dessert, I lost out. So I had everything assembled in his fancy schmancy Le Creuset dutch oven, and of course we actually had a babysitter coming with no time left on the clock to bake this long awaited dessert, so into the fridge it went.

So what could be better than a yummy dessert... ice cream for breakfast of course. In the morning I put it in and Katherine was not lying when she said that the whole house would smell irresistable. Eventhough I doubled the recipe, it was ready in about 50 min. The color was phenomenal, the smell ...well we've already established that, and the taste was so rich and yummy. I'm not sure if the recipe creates a taste originally this decadent or if the overnight soak helped, but we all loved it. Yeah, I did it. Who am I? I do have to say that cooking does make for a lot more dishes to clean. Anyway, I'm going to try something with my peaches next. Would love to hear any dessert ideas you have! 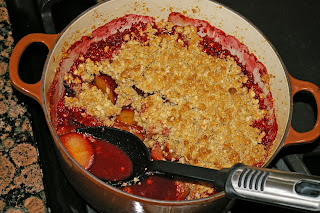 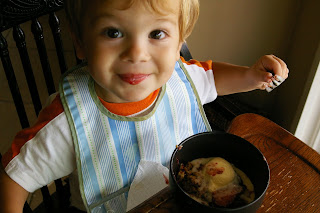 Email ThisBlogThis!Share to TwitterShare to FacebookShare to Pinterest
Labels: attempts at cooking, the dish on mommyhood