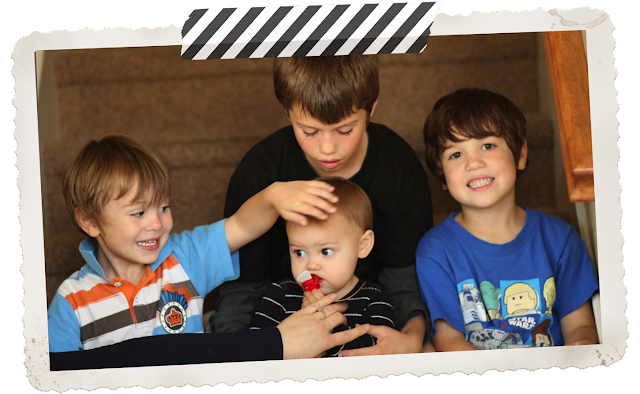 About 5 minutes after I left the house for the store I was about to turn around and retreat.
"Mom, Eyan's punching me!"
"He hit me first."
It went on for a few minutes and then it happened...
"Mom, Tate's touching me with his elbow."
"No I'm not."
I turned around to try and handle it and I saw an image that whisked me back in time and I just couldn't help but laugh.
There was Tate in the backseat bearing a bright, mischievous grin as he had his elbow firmly planted in the air hovering about 2 inches away from Eyan's body.  He wasn't touching Eyan, he just had his elbow close enough that it would drive Eyan crazy.
Oh my word.  I had witnessed this near exact scene so many times in a car ride full of 5 siblings.  The whole, "He's touching me.  He's breathing on me.  He's staring at me." routine.  Although in my recollection most of my involvement seemed to be centered around the times in which my sister's feet were strategically placed on the headrest just next to our face.
It had happened.
Life had come full circle.
I had added my link to the long chain of motherhood.

And then on the way home it happened again...
Listening to the radio is difficult for my children who are used to 'on demand' music from IPods and IPhones.  They just don't get the concept of 'this is what's playing and we can't listen to "Dynamite" for the bigillionth time'.
Lack of an IPhone attachment necessitated the use of the radio.  I flipped through the stations and immediately stopped on U2's "With or Without You" and announced, "This is a classic boys!" to which I blared the volume and began singing along with my imaginary microphone and serenading them.  Pointing to them and singing during various lines.
"Mom, turn it down."
"Mom, this is the weirdest song I've ever heard."
I began to laugh again.
I recognized the laugh.  It was the same one that drove me crazy from time to time growing up.  The one my Mom would do when we complained about her choice in music or when we'd ask her to stop drawing attention to herself {usually dancing in the car} because she was embarrassing us and she would just keep on doing it.
It had happened again.
Life had come full circle.
I had lived some of those same moments my mom had lived.  And you know what she survived them and she was happy.   And she had raised happy kids.

Email ThisBlogThis!Share to TwitterShare to FacebookShare to Pinterest
Labels: peek into my past, pure boy bedlam, the dish on mommyhood