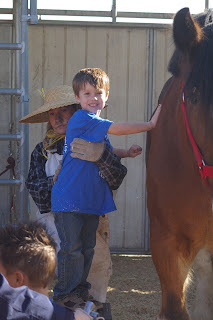 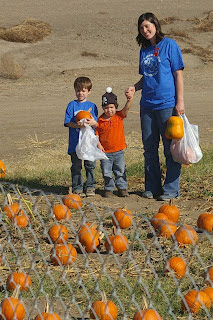 Halloween Day was packed. It started with Owen's first Kindergarten Field Trip, a trip to a farm and pumpkin patch. Grandma, Eyan, Tate, and I came along too.

Later in the afternoon the kids and I made our first attempt at carving pumpkins together. Personally I take great pride in my pumpkin carving, I have my own set of wood carving tools that I normally use each year, but since they are in storage - along with most of our possessions - a regular old knife had to due this year. I cut the tops off of the pumpkins and let the kids scoop out their own seeds. It was quite a funny sight - Owen was complaining about the stringy mess and Eyan was scrunching up his nose and telling me that it was "smellney". Seeds were flying. I think they turned out pretty well for our first family attempt. 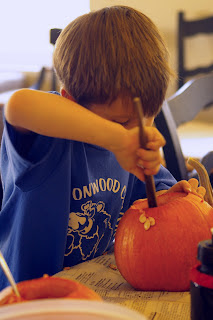 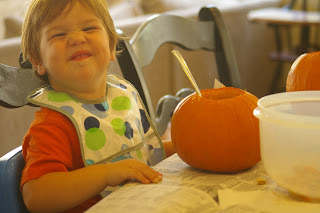 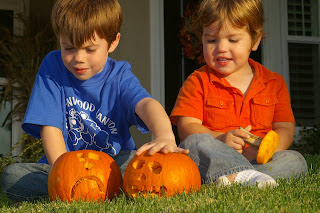 I carved out a huge pumpkin for Grandma for her to make her annual "Dinner in a Pumpkin" - Yumm-O!

During dinner things took a nose dive, literally. Owen just about face planted into his dinner as he drooped from not feeling well. He looked horrible, but insisted on Trick Or Treating. Grandpa convinced him that 15 houses sounded like a lot of houses to go to. I thought that sounded fair! 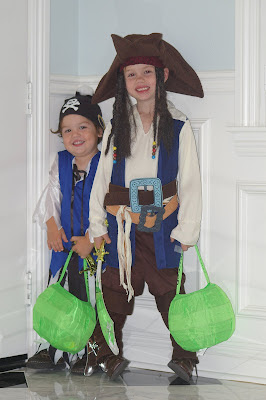 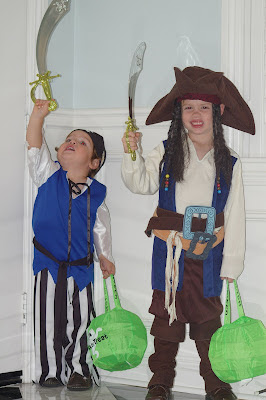 Since my Mom's neighborhood is so new, there were hardly any Treaters or houses giving out candy. It worked out just fine. Each house they did go to gave about 4 handfuls to each one. They came home in about 20-30 minutes with bags looking like they had been out all night. As soon as Owen came back HE ASKED TO GO TO BED!!! WOW. He must really have been sick - in fact he was - in the middle of the night he woke up screaming because he couldn't open his eyes - a doctor's office visit later we discovered he had a severe ear infection that spread to his eyes, poor little guy. Lots of days home from school for him. Candy does make things better though!
Created by Briana @ Sweet Dreams are Made of These at 11/09/2007