In the Arms of Your Daddy 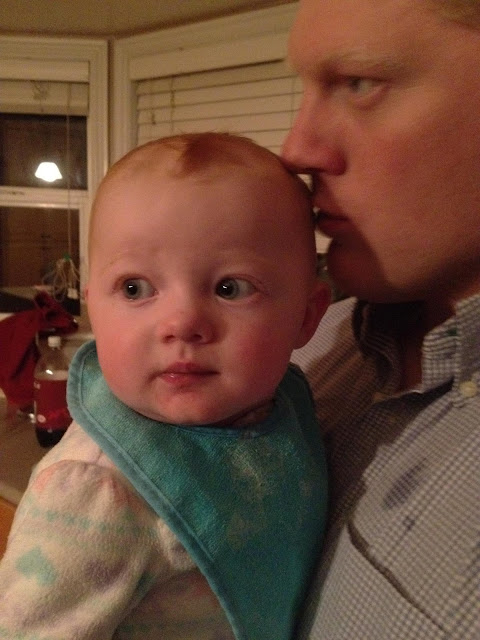 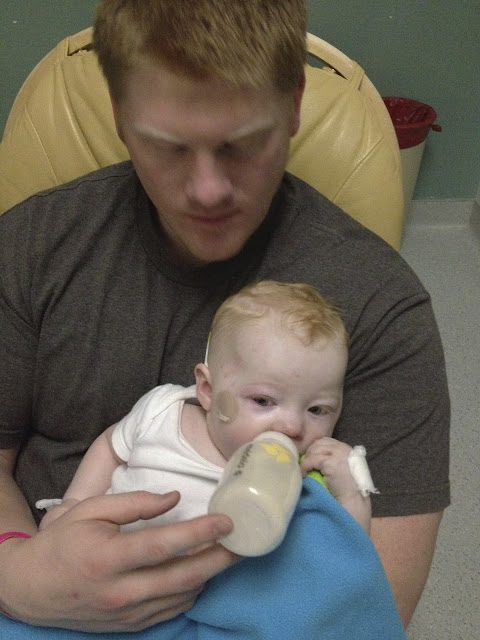 i can not fathom how dearly Jesse wishes that for Abigail.
with every embrace he wants her to feel that.
how he wishes he could do more
but oh how i know he is doing so much.
doing just that
and more
above those arms are the shoulders which carry oh so many burdens
my Jesse is a man, a man who is a man in every noble and true sense of the word.
how this sister is so proud of him

this last photo is such a stark contrast to the videos of a bouncing and lively Abigail i have seen over the past few months.
yes baby Abigail is back in the hospital today.
another procedure, i believe her fourth surgery since her birth in July.
thankfully she is already out and recovering in the arms of her stalwart father.

the procedure was suspected to take four hours and they were completed in a hour and a half with rave reviews.  i do not have the exact results yet as to what they were able to accomplish or discover from the procedure, but my mother emailed me this morning with the details regarding the purpose for the procedure:

"she is undergoing a procedure to enlarge her pulmonary artery to allow greater oxygen flow.  Her anatomy has been modified to allow blood to flow via gravity from her brain through the superior vena cava directly to her pulmonary artery bypassing her heart altogether to obtain oxygen in her lungs. The doctors are concerned that her pulmonary artery has narrowed preventing sufficient blood to be oxygenated.  This is why she is needing this procedure.  There are 3 possible things that they will do: 1. check the pulmonary artery to see if it has narrowed & check to make sure that oxygenated and deoxygenated blood are not mixing together and causing her saturation levels to decrease 2. they will probably need to use a balloon to enlarge the pulmonary 3. they may need in addition to the balloon to insert a stint to keep it open.  Hope that makes sense!"

both my mother and father are there with Jesse, Jani, and little Abigail today.  My mother expressed gratitude for being able to come up prior to the surgery so that she could spend time with Abigail, to become reacquainted and play!!


"She's a sweet baby girl and is so active.  It makes me happy to see her so normal!!"

our family has been overwhelmed by the love you have expressed for this champion of a baby, even Abigail.  we would love your continued prayers and thoughts as she moves into recovery and observation.

after speaking with my mom, i have more details to share and great news!
the doctors ordered this procedure because they had believed that Abigail's pulmonary artery was narrowing.  they intended to insert a balloon into it, but after doing their initial measurements and look via wires and probe placed through a tube inserted in a vein in her neck, they discovered that the artery had not narrowed after all.  what they had believed to have seen on pre-surgical tests as her pulmonary artery, was in fact an additional small branch that is connected off of her pulmonary artery which is aiding in the flow of blood to the lungs.   from what i understand, everyone has this particular branch, but it is in a different location within the normal anatomy of the heart.

the doctors were very pleased with how everything looked and was flowing.  they believe that she will not require another surgery until she is 3!  her oxygen saturation levels are currently acceptable though still low.  she will continue to be allowed to be entirely off oxygen, a fete that is only been a week or so in the making.   the procedure lasted only an hour and a half and she was then back in the arms of her daddy and mommy.  although she was a little irritable, she recuperated quickly and is now at home!!!

my mother told me that when she had arrived the day before the surgery, Jesse had made a remark to advise her that Abigail was not a snuggler but was in constant motion.  and boy was that the truth, she twisted and turned, always wanting to be put down and on the move.
today after the surgery Abigail just laid in Jesse's arms.  Jesse voiced concerns that she must not be feeling alright, but my mother simply told him, just enjoy holding her Jesse, just enjoy it!

Email ThisBlogThis!Share to TwitterShare to FacebookShare to Pinterest
Labels: Abigail, we are family
In the Arms of Your Daddy
2012-02-10T20:56:00-07:00
Briana @ Sweet Dreams are Made of These
Abigail|we are family|
Newer Post Older Post Home